If you can call us that.

This past weekend, my boyfriend and I went on a hike in the Malibu Hills. The one to the Grotto, at the Circle X Ranch. We were celebrating my birthday and headed out with the best intentions and two bags worth of a picnic. I held one bag, my boyfriend the other. He also graciously held our large water bottle too.

On the hike we went. It was a well-worn path and I think we both eased into the idea that this was going to be a simple, relaxing hike. He mentioned he thought a website said this was a beginner’s trail. We soon spotted a sign that read “Grotto Trail 1.3 miles” and an arrow pointing in the direction of it. Hmm.. so we weren’t exactly on the trail yet. Okay. No worries. We continued on. Passed a side road where at the end of it was one of those old phone-booths. The kind Superman used when he was changing from Clark Kent.

Soon, we came to a divide and proceeded toward the Grotto trail. The path grew smaller and headed into dense mountainside. It was pretty, though. As we continued on, deeper into the mountains, we passed a friendly group, who explained with somewhat vague directions, “when you come to the rocks, make a right at the smooth, flat one and then shimmy down between the boulders but you can use the tree branches to hold yourself…” Huh?? One member of the group was a rather large, elderly lady and so, I’ll admit that both my boyfriend and myself thought, which we later said out loud to each other, “Well, if she can do, I’ll have no problem.”

Onward we went. The path got more narrow, the sun blazed on our heads, the white shorts I so expertly planned to wear had gathered a thin layer of dirt on them and my boyfriend took pictures. Then, time started moving a little slower and sometime later, I found myself wanting to cry out, “Are we there yet?!” But we passed more people, got even vaguer directions (“At the big rock, stay right..”) and kept on.

And then we came to the rocks. Hallelujah! Or so I thought. All the directions we gathered along the way meant little to us though we did shimmy between rocks and stuck right at a large, smooth one. I, in fact, even swung from some branches and my still aching arms can prove it. And with some help by a young, cute couple, we finally made it to the grotto. 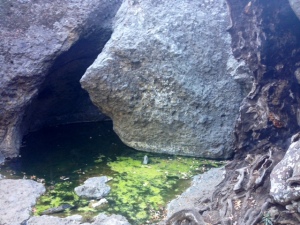 But it was also full of bugs.

We tried to find somewhere to picnic, but it wasn’t happening. So we decided to have just a little snack before heading back up. My boyfriend took out the cheese and bread and made a yummy spread. This was, however, soon interrupted. Suddenly, he grabbed his plate very quickly and moved practically right on top of me. We were on a little ledge so there wasn’t a lot of wiggle room. I asked him what happened, and he said he saw a squirrel. I thought, “Geez, babe, it’s just a squirrel.” And then I said that out loud. He was standing really still. Than, he grabbed the bag and said, “Okay, it’s a rat. Let’s go!” We quickly grabbed our stuff and got the hell out of there, but not before a clueless group of friends asked me to take their picture.

With little more than a couple bites inside us, we decided it was time to head back up. The bugs were everywhere and the bags were getting heavy. As we walked, we started forming a list of things not to do when going on a hike of this nature – wear white, bring a picnic and not eat first. Neither myself or my boyfriend have ever really done a strenuous hike, if you couldn’t already tell that.

So, we climbed up, and up, and up, and up. The sun was about a trillion degrees, as was our water by this point, and shade was no where in sight. We both ate our words about how easy this was going to be, considering that lady could do it. (Love when stereotypes are defied!) And things such as “Babe, I need you to give my butt a big push when I say go” and “Let’s swing from that branch and land on that rock over there” came out of my mouth as I tried desperately to keep going. I should probably say for those who don’t know me well, I do not work out. I’m not a camping, outdoorsy type. When I’m outside, I like to lounge and relax. Not saying I’m proud of this, but it’s the truth and will help to explain why at this point in the hike, I kinda believed, I might actually die out here.

My boyfriend and I thought the end of the trail was coming about fifteen times too early. I couldn’t talk anymore. My only goal was to get back to my air-conditioned car at this point. My boyfriend painted the picture for me, of how nice it will be in just a few more moments. Few more moments, my ass. What seemed like a lifetime later, we finally made it to the car. My boyfriend went to the bathroom while I, using every last ounce of energy I had, pressed the door-open button on my remote, climbed into the passenger seat, and rested my head.